After leaving the club last night, I had a few hundred in my pocket, I felt hot and dirty from the drinks and busy hands of the clientele there. I wrongly expected a strip club, what I found was more of a free-for-all. For context, let me lay down some details of my experience stripping in SF.

The club was a transgender specific venue, dancers on Tuesday and Thursday, drag shows other nights. The strippers started around 10:30 and went until last call at 2, usually didn’t get busy until 1. The reason for this was that most of the people didn’t come to enjoy the environment, they came to bring a girl home with them. There were 2 authoritative figures, the owner and a bossy DJ, the owner was a smart but strict, kinda mousy and obviously an admirer. He told me the rules my first night there, no nudity off the stage, only topless onstage, no touching or toplessness in the champagne room, no going home with people, everyone dances 3 times a night to a 3 song set, your first night there you had to dance first. There were set prices and lengths for lapdances and the owner kept a close eye on the girls and visitors. The girls kept all the money they made, the drinks were moderately priced and all the bar/door income went to the club.

It was kinda safe, kinda fun, the girls still broke all the rules all the time, but there was at least a facade of authority. At the club in NYC it was much more of a free-for-all, lapdances were twenty but you could get down anywhere, the girls all acted as free agents not as employees. The drinks were super expensive, the club doesn’t seem to always host transgirls so the door (which was twice as much as SF) and bar were likely split between the promotor and club.

Both places were equally sleazy, but SF had a bit more charm to it. It was more of a show, and the nights didn’t go so long due to bars closing at 2am instead of NYC’s 4am. I worked both clubs for the reason I do many things, for the experience. It was interesting to see the part of the transcommunity that you rarely see at leadership conferences and support groups. Sex workers are easily the least protected and most at-risk group, I think solutions come from understanding, and that begins with being able to relate. I have more opportunities available to me than the girls that work those places, even if it’s merely youth or longer periods of sobriety or the ability to use a computer. I want to do what I can to help my sisters and at the same time not judge, I’ve sinned enough to not start picking up stones. I like that analogy so I’m going to stick with it, but honestly, sex work is underground, shameful, not polite conversation yet an inevitable part of society (see “oldest profession“). It happens everyday all the time and I feel we should do overcome the taboo of it and protect those involved.

I will likely be going to the clubs again, but with a different mindset. It seems like a good place to be seen by promoters and industry people, and I’ve been among the youngest, most natural of the girls there so I’ve received a ton of attention. When I first walked in, I was completely ignored until the loudest girl (we had one in SF) asked me if I had a cock (same thing happened in SF, except backstage). I like being passable, but I’ve faced my share of adversity from gay people as well, society is a total mess. I’ll be posting more about my adventures both above and below ground, I’ll be reporting (semi)live from the frontlines of the gender movement, I’ll fill you in on the grimy bits. More stuff soon, stay vigilant and stay proud 🙂

3 thoughts on “you can react if you want to” 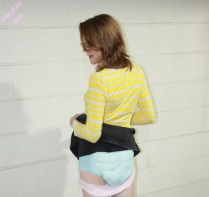