Get me outta here!
If there’s two things that make me smile, it’s diapers & the Simpsons. Last Sunday, these things collided in a weird-ass episode, it’s 1/2 Inception, 1/2 bedwetting fanfic and makes me feel weird. Read ahead or watch it on Hulu first, as this post is full of spoilers!
I’ve been watching the simpsons as long as I can remember, I was 3 when “Simpsons Roasting Over An Open Fire” came out, the first episode, and I’ve watched ever since. I’ve missed some of the more recent episodes and honestly, I think season 13 was the last decent season, with a few good episodes here and there since. I don’t watch many new shows, and find myself returning to the familiarity and comfort of 90’s TV…. or Diapers.

I saw this picture on Reddit the other day, “lol wut” was my only reaction. I did a little research and found that Homer becomes a bedwetter in the most recent episode of The Simpsons…

I honestly don’t know how to feel. I didn’t like how Homer was emasculated, the gags were pretty easily achieved and it forced nostalgia and “smart” jokes… but the Simpsons has been failing in that manner for the last 10 seasons, this was a little different, it was dark, it made me sad at points, still does. Basically, Homer screws over his friends and Karma kicks in, causing him to wet the bed. 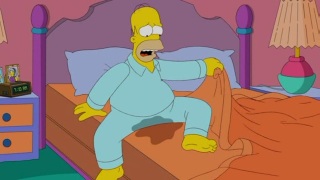 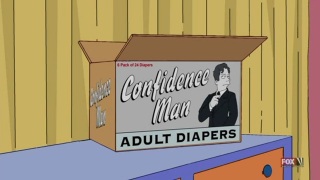 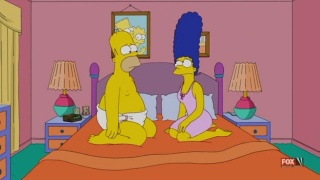 He hides it from Marge and the kids, until he tries out a too obvious bedwetting alarm, and the awkward “what’s that under the sheets” conversation begins. In the context of hiding something embarrassing from family it was awkward, this is why people are anxious, hiding feelings from my parental figures (rollercoasters, bullying and certain Simpson episodes among other things) are why I’m a pretty anxious adult, and maybe why I so thoroughly embrace comfort objects. 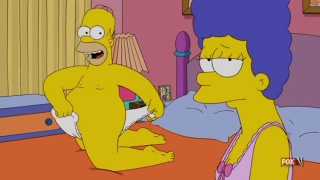 Poor Homer! He’s super upset about wearing diapers, and Marge laments “sorry Homer, a diaper is just not sexy”. I don’t know how to feel about that, I like diapers, and I like sex, sometimes at the same time, sometimes not, I can be a sexy adult in diapers, and a cuddly girl in grown-up clothes… it’s all quiet confusing. In the context of a Nuclear family, the kind of sex a married cis & hetero couple would have, diapers don’t really fit in. The sex I have is all over the place, flowing, kinky, taboo, playing with age, gender, roles, textures, objects, sometimes I just happen to be wearing diapers and end up having sex in them, sometimes I get put in them for the specific reason of being sexualized. It’s confusing, this is why this episode has got me all frazzled. Marge in diapers would have been sexy, that’s the only solid thought I have on all of this.
The episode gets ridiculous, Marge seeks alternatives after homer gets obnoxious about his diapers, and they use an Inception-esq machine to go into Homers dreams, and it all gets pretty sci-fi silly from then on. They don’t really revisit the diapers from then on, instead bringing back his mother and creating a flashback storyline from that. Not really funny, but interesting, good animation, the South Korean children that animate the Simpsons get better every year 😛
That was bad, this was bad, if there’s diapers on TV, it’s usually pretty bad, this one just hit close to home. After a couple days of letting it all sink in, I get that Truman Show-esq tingle in your spine, like this episode is a glitch in the Matrix, your brain trying to tell you that you’re dreaming. I diiiid just visit my Mom, and they did end with a song very close to me, “Dream Operator” from True Stories. Strange.
Also these things.

So there’s my little Simpsons wrap-up. I’ll keep my eye out for more silly diaper things. I’ll just try and forget about this awkward little encounter with diapers on my favorite family. I’ll leave you now to sleep, perchance, to dream, hugs and cuddles, just close your eyes little ones, drift off to sleep… ❤
When you were little
You dreamed you were big
You must have been something
A real tiny kid
You wish you were me
I wish I was you
Now don’t you wake up
The dream will come true 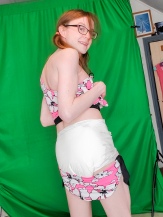 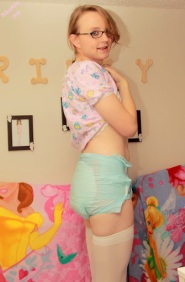 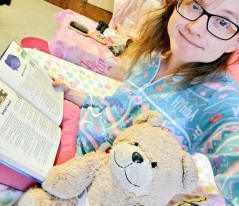