I no longer live in Buffalo, I live in the Hollywood area of Los Angeles ❤

hahaha, there are few finer ways to gain confidence than the admiration of a young swede. stay weird little lolita ❤

Huggles back! It’s been quite the journey, hormones and being little and adventure and all that! Thanks for coming along with me, showing your support, big hugs and stay beautiful friend ❤

Thanks love, I really appreciate the kind words, its always nice to be reminded there are good people out there! I’m enjoying looking at your tumblr, its very nice to meet you Jade ❤

a wonderful idea, share some crinkly positivity! Thanks for the kind words 😛

and I agree, bonnets totally aren’t my thing 😛

I’m walking out of the Los Angeles county courthouse, trying to obscure my face with my purse, reporters are swarming up the steps towards me. Blinded by the flashes I stumble for a second, giving the press a moment to wedge themselves betweeen me and the shiny black limousine, safety. Their microphones surround me, over the sea of shutters the onslaught of questions begin. A fresh faced young journalist breakthrough the crowd and raises her voice above the others, causing a moment of clarity in the rabble as she asks her question…
“Ms. Riley Kilo is it true that on occasion you mess your diapers?”
silence

“well… yeah, sometimes, but not all the time, usually with an enema…”
the silence continues, the young woman just stares, as if she opened a bag labeled dead dove, do not eat and expected something else inside.
“I must be going…”
The strange quiet broke and the press reverted back to its feral nature, as I rushed to the car I heard reporters yell “have you ever messed with anyone famous?” “how has your messing effected your dating life” “what brand of enema do you endorse?” “how many a times do you mess in a day?” “what is that number multiplied by 365?” – I closed the car door and sat next to my partner in crime, the notorious crinkler Cincy Bear. My co-conspirator asked how things went, I exhaled loudly and put Cincy in my lap, stroking his fluff and pinching his ear a bit. Our limousine speeds away, leaving the reporters to move onto the next little bit of oddness, of human expression to exploit for the sake of journalism. Cincy and I do fine without their approval.

That’s a bit of a dramatization of how I feel about messing, one of the most common questions I get is “Do you mess?” Now, I don’t see my fellow diapered people as media vultures, it’s this largely imaginary force of feeling not accepted, of fear that you won’t get a job, a friend, a lover if people find out that I occasionally mess. Let me get this off my ever growing chest, yes, I mess about 2 or 3 times a month maybe, sometimes less, sometimes more. I often take enemas about once a week for health and cleanliness reasons and don’t always use a diaper… sometimes I do. Or if someone else is using the big girl potty at my apartment I may mess… sometimes I even use marshmallows to simulate/encourage messing. Yeah, it happens, its humiliating and I like the feeling but it’s the entire act of messing that I like, not the actual mess itself. I’m grossing myself out even writing this thanks to my too-vivid imagination. It’s not a fundamental part of my ABDL experience by any means, its mostly been a singular experience… I get embarrassed :0
There’s only one time in particular that I can remember messing in public. I was new to going out in diapers and was experimenting with glycerin earlier in the day, It was a dangerous combination. I messed, felt kinda awful and was in my car driving home 2 minutes afterwards, noone noticed and my plastic pants surely kept anyone from “nosing” into my accident. I *have* to wear diapers for the 24 hours after an olive oil enema, but I don’t find myself messing anywhere outside of an actual scene. For those less familiar with kink when I say “scene” I mean an isolated sexual interaction. If you and I were to have coffee on my porch and talk about how we were going to tie each other up/roleplay/fuck, we’d be discussing a “scene”. If we went in and did all that, we’d do it in a “scene”. If you got a long phonecall and left me with my panties half-down, you’d be breaking the scene. If I messed my diapers in public and intentionally made anyone else aware of it, I’d be forcing them into my scene, which isn’t cool. If you’re one of the few actually incontinent people reading this, don’t be ashamed and don’t worry, its hard to isolate even *that* smell in a busy market, also invest in plastic pants, ones with ruffles 😛

I mess, but messing can be a bit of a slippery slope, you finding yourself wanting to do it more and more… be a little enema slave… I am pretty ::blushes:: small, some would say tight, in my bottom region so enemas etc are a good way to enjoy anal play without tearing myself a new one… Plugs are wonderful, theres all sorts of tips and inflatable plugs, most of my more devious fantasies involve hardcore medical play such as this, catheters, diaper bondage, locking plastic panties… this is what happens when I write a post sitting on my washing machine, I get terribly excited thinking about these things 🙂 Much of the darker stuff, lies merely in fantasy, but I still love writing, thinking, imagining it, maybe someday.

I have much more experience with partners as a domme than I have as a sub, more experience with myself than with anyone. I look forward to someday having some really kinky, really wonderful experiences in my life, I hope that you come along for the journey. These photos I took before a recent photoshoot, I generally do an enema if i’m going to be playing with dildos and stuff for a shoot, I want a clean bottom! I gave myself a nice little disposable enema and held it in, sitting on Bear on my bed until I just can’t hold it anymore, squirming… anywaaay, I had to take some pictures after the whole ordeal because I was feeling so cute. I knew if the toppost was a picture of me in messy diapers, i’d want to post sooner than later 😛

Messing is a complicated issue, and I’ll stick with my “we don’t really talk about that” answer if every confronted… I’m still a good girl, I just can be a little bad sometimes! I hope you’ve enjoyed this diapered journey into a bit of a touchy subject, however messy the topic may be, it always tends to end with a nice cleansing shower. To all the big or little friends out there, dry, wet or even those those of you wearing grown-up undies (boo!), thanks for reading, stay unique and i’ll staydiapered~!

I’ve got a big messy post coming up soon, I was going to post it today but I still need to put the finishing touches on it… Here are a couple crinkly pics in the meantime 🙂 hugs!!! 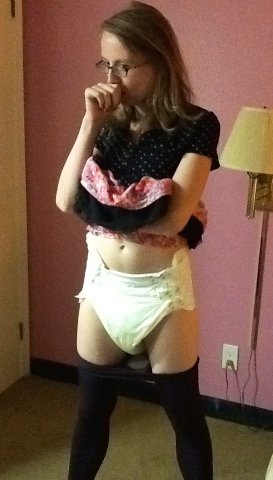 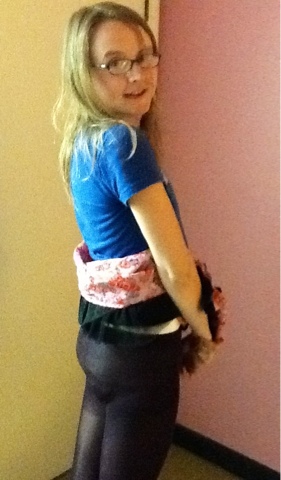 little princess getting her toy ready